Arizona Swing Kings “Great American Songbook and All That Jazz” 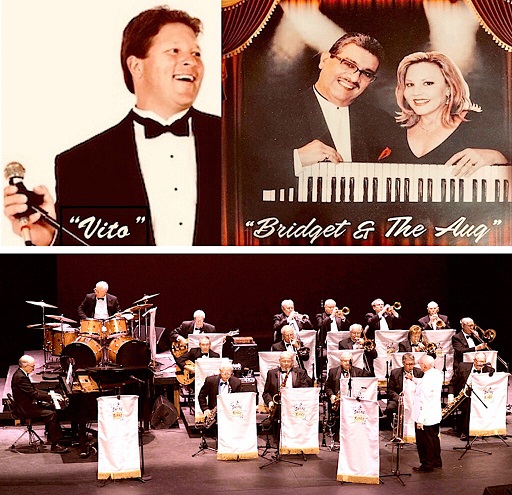 The show will feature vocal artists Vito Maynes and Bridget Maynes, with piano accompanist Auggie Mendoza. The AZ Swing Kings Orchestra is a big band of 18 members, plus vocalists. The musicians are all professionally experienced performers of the big band swing/jazz style of music. The band is directed by Lenny King, creator and former director of the Chicago Metropolitan Jazz Orchestra.

“The Great American Songbook” refers to the golden age of songwriting, when many of the most important & influential American popular songs of the 20th century became hits that turned into standards. This program will feature the music of famous composers such as: Duke Ellington, Cole Porter, Rodgers and Hammerstein, Hoagy Carmichael, Count Basie, Glenn Miller, George Gershwin, Billy Strayhorn, and many others.

Vito Maynes is one of ten musically talented siblings. He performs in the timeless style of Frank Sinatra and has been involved in performing most of his life. The Big Band Era was the genre that has fascinated him the most.

The “Bridget & “The Aug” Duo has been in existence since 1990. The duo consists of the lovely vocals of Bridget Maynes, and the piano/keyboard stylings of Auggie Mendoza. Bridget is the founder of the award-winning “Mayneswing” girls trio which won Best Vocal Group of the year for 3 years in a row by “Jazz In Arizona.” Auggie “The Aug” is a very famous bassist, pianist, and music writer/arranger in the valley’s music industry.

Entertainment for all ages – Open to the public – Free admission – Open seating – Doors open at 6:15pm. This will be a fantastic evening of musical entertainment!

This performance is funded by a City of Glendale “We Are One” Arts & Cultural Grant.